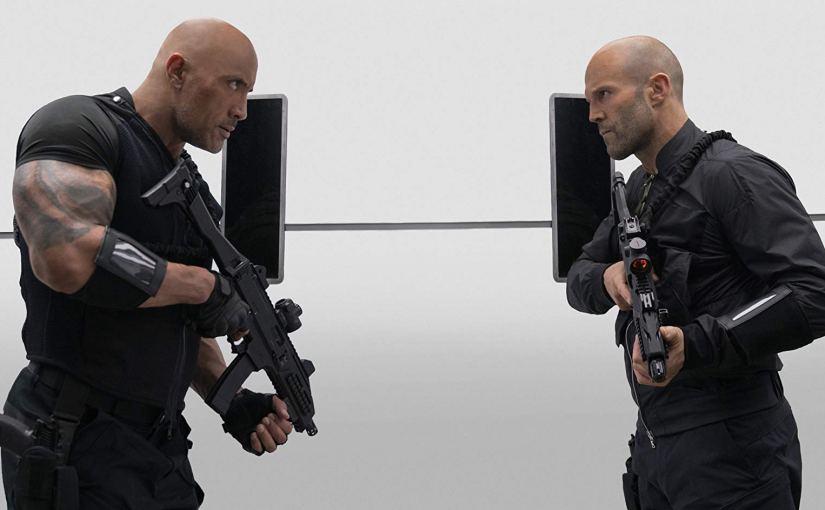 The Fate of the Furious saw Jason Statham decimate a plane’s worth of enemies à la Hard Boiled and The Rock push a torpedo away with his barehands; their cinematic match-up as a duo was inevitable. Two former antagonists, arrogant but good-hearted, with a distaste for one another.

Deckard Shaw (Statham) and Luke Hobbs (Dwayne Johnson) are forced to work together when super-powered anarchist Brixton (Idris Elba) threatens the humanity on a global scale with a manufactured ultra-virus. Rogue MI6 agent Hattie (Vanessa Kirby) is also in the mix – who just so happens to be Deckard’s sister.

A rip-roaring opening sequence introduces us to Elba’s “bad guy” and Kirby’s mysterious character, initially played against a melancholic piece of music. We soon meet our titular team in a split-screen montage, hilariously highlighting their many, many differences – pints and protein powder, brutal and methodical – but also the potential lethality of an alliance.

Johnson’s Hobbs will never be as good as in Fast Five, his introduction to the series as a buff, no-nonsense enemy (“One more thing… stay the fuck out of my way”). This is his best turn since then, though – living up to the claim of “an ice-cold can of whoop-ass” with boundless charm. Statham, growing from the cagey, seismic force of his villainy in Furious 7, is an energising presence – The Stath is the man. The pair relish Chris Morgan and Drew Pearce’s screenplay, which often descends to the point of roasts – Hobbs says Shaw has a “pre-pubescent Harry Potter voice”, Shaw apologises to Hobbs if the trousers he gives him to wear are “a little loose around the balls”.

Kirby is the perfect foil to their dick-swinging; outpacing femme fatale and damsel-in-distress stereotypes as a feisty, badass woman. As an audition tape for the role of Catwoman in the upcoming Batman reboot, she couldn’t manage better; her acrobatic, flexible and versatile screen skills continually inspire hurrahs and lip-tightening inhales.

Elba is a fabulous and importantly memorable baddy, chewing glorious lines – including but not limited to “I’m black Superman”, “If you’re lying to me, I will cut your heart out” and, of course, “Genocide schmenocide”. His relentless mission to end Hobbs and Shaw has some interesting twists and turns; specifically relating to the nefarious organisation behind all the chaos, which will no-doubt be explored in future outings.

David Leitch, director of John Wick and Deadpool 2, channels the latter’s sensibilities to orchestrate a-class action nonsense (as well as pulling a few strings for some… interesting… cameos). Small moments, like Hobbs upper-cutting a man so hard he flies through a door and into a tattooist’s chair and Shaw’s champagne assault, are tasty. But it’s the ludicrous set-pieces that’ll send you home buzzing. From a city-wide chase – that not only features a lot of Glasgow, but owes Tron: Legacy a huge debt – to a power-plant showdown that sees Statham punching Elba while Elba punches Johnson in an unforgettable punch-athon – think Bam Margera’s Rocky segments in Jackass.

The film eventually travels to Samoa, which is where it starts to wobble. Like all Fast & Furious entries, it’s all about family. Though, that theme isn’t felt as resonantly as in, say, Furious 7. It’s not long till we’re back in business though, and Johnson’s Hobbs pulls down a bloody helicopter – proper Captain America: Civil War style. It has all the physics-abiding of a souped-up cartoon – an endless, exploding symphony of terrific stupidity. Also, Roman Reigns spears someone, which continues the trend set by The Rock of hiring wrestlers and getting them to perform signature moves as part of the choreography.

Yet, it all adds to the absurdly, but perfectly cheesy essence Hobbs & Shaw embodies. All the best bits of the buddy flicks of the 80s and 90s are here, but with modern, flush production values. Think Lethal Weapon with two Riggs’ – it’s an absolute hoot. There’s a NOS scene, Kirby is magnetic, and the three men in conflict are irresistible. Bring on the sequel.