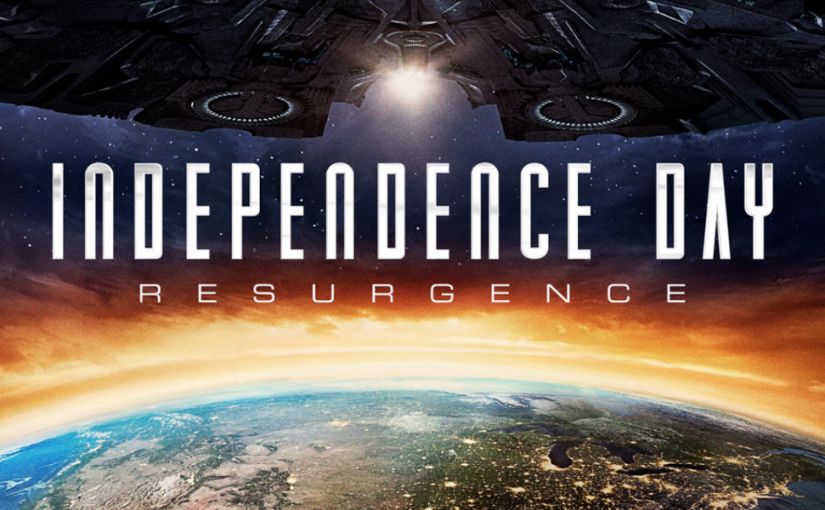 It’s been a whole 20 years since Independence Day was released. It was groundbreaking at the time, showcasing incredible effects that had previously not been attempted. It is considered by many as the first ever ‘blockbuster’. Now we have the sequel, directed once again by disaster-porn pro Roland Emmerich. I’m a sucker for mass destruction, but is the sequel actually worth your time?

The film is set in the present day, but more as an alternative universe. Essentially the humans have used the alien technology from the first film to revolutionise weapons, transport – pretty much everything. However, signs pointing to another attack are becoming more frequent, and before you know it, it’s round two.

If Independence Day was ever going to get a sequel, this would be the script I’d hope for. It follows on nicely from the first, showing development in both the humans and the aliens. The thing is, this film belongs in 2006 – not 2016.

It’s a rather predictable affair, taking us along a familiar route of “Oh shit, they’re attacking” to “There’s nothing we can do” to… well, you see where I’m going with this. Don’t get me wrong the predictability doesn’t suck the enjoyment out of it. I sat back and let the film take me on this journey, and that’s all I can recommend to those who decide to see it.

There’s a few spectacular moments throughout – the Burj Khalifa down on London being a personal highlight. It’s the novelty of it – much like the infamous White house explosion in the first film – that widens that smile on your face. However, the first one had novel special effects on it’s side as well, whereas as now they can only be described as yawn-inducing.

Emmerich has made a career out of this sort of entertainment, but in turn this has desensitised people to the wonder and awe of it all. I miss that feeling of my jaw dropping when I see an alien ship blown to kingdom come. 10 years ago this might have gripped viewers, not now.

There is one obvious issue with the cast – no Will Smith. Resurgence needed him badly. It would have engaged more viewers, fuelling that nostalgia that likely carried some people to the cinema. I would have loved to see the old Captain Hiller in action, punching aliens in the face and throwing out a classic one-liner.

Instead, we’re fed sloppy seconds in the form of his ‘son’. Making things worse, the film tries to tell us how he was ‘killed in a training exercise’. The writer’s really did take the cake with this one.

To give credit where it’s due the young cast featuring the likes of Liam Hemsworth and Maika Monroe do well, clearly having fun in the process. We also have Bill Pulman and the legend Jeff Goldblum returning to their respective roles. Damn, gotta love Goldblum. Alas, no Will Smith.

As a sequel it may continue on the story, introduce new characters and tease possible directions, but it simply doesn’t break enough new ground to be considered a success. As enjoyable as it is, it’s all too familiar – especially for fans of the first film. The absence of Will Smith can’t be forgiven, that’s a certainty. But if you’re looking for an easy way to spend two hours: leave your brain at the door, grab your popcorn and enjoy the ride.

Check out the trailer:

What do you think? Will you be seeing Independence Day: Resurgence? Let me know what you think in the comments, or tweet @film_swot.