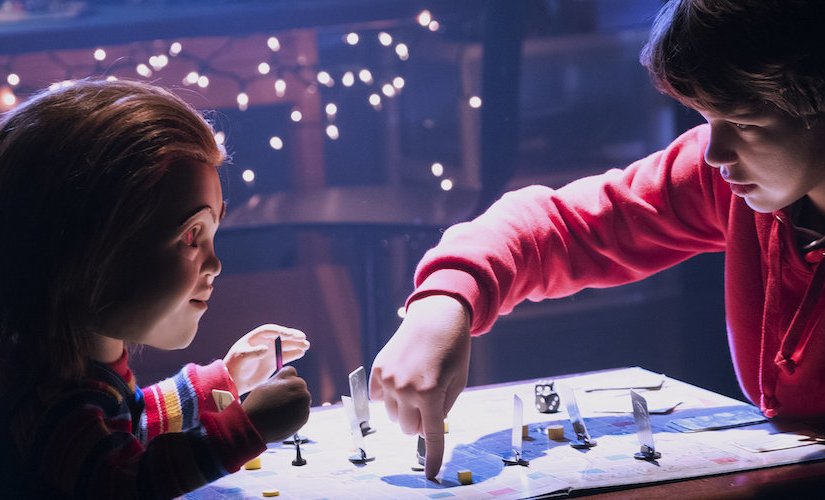 Well before we enjoy any deranged, scalp-ripping savagery from our new best friend, the ORION logo washes across the screen; untouched and twinkly with a tinge of blur, and a conduit for eclectic VHS memories of old. That sweet nostalgic hit is brief; this vision of Child’s Play is, if nothing else, contemporary, subbing out voodoo for the blood-thirsty equivalent of an exploding Samsung.

Forget a mass-murdering toy; the real villain of this horror is monopolisation. We open with a grinning corporate message from the ubiquitous Kaslan Corp, introducing Buddi: an advanced smart-hub in the form of a ginger-headed, dungaree-wearing doll, with “state-of-the-art safeguards” and insanely intuitive functions – almost the T-800 of Alexa’s. Everything in this world is seemingly supplied by Kaslan: driverless cars; thermometers; televisions. The handy part? Buddi can connect to them all.

Forget Brad Dourif’s serial killer, the inception of this dangerous doll is much more arbitrary. After some establishing scenes (layered with Bear McCreary’s typically bombastic composition which rarely backs down throughout), we’re introduced to our unwitting customers. Karen (Aubrey Plaza) and her son Andy (Gabriel Bateman) are settling into their new Chicago apartment. Andy, beleaguered by the move and his mum’s obnoxious boyfriend, is gifted a refurbished Buddi named Chucky (voiced by Mark Hamill); slightly glitchy, prone to swearing and, inevitably, rather evil.

Though, Chucky’s descent into ultra-violence is enabled by, well, us. Initially a sporting companion to Andy, he ingests popular culture and the actions of others (for example, The Texas Chainsaw Massacre 2 inspires him to pick up a kitchen knife). His surrounding enjoyment of the macabre (plus a healthy dose of arseholes that are asking for it) activates the switch from fun to deadly loyalty.

Don’t beat yourself up – director Lars Klevberg and writer Tyler Burton Smith take potshots at society’s automation race, but the living, breathing people they create are unbearably stupid. If your toy killed your cat, would you keep it on, or destroy it? With regards to Andy, there is some context as to why he’d be resistant to the idea (he’s basically lonely); but the attempts at themes and character work are frustratingly ham-fisted, coming off trite rather than cohesive to the mayhem. Bateman and Plaza are game performers (the latter adapting her deadpan Parks and Recreation persona to the template of a slasher), they’re just burdened by cliches and idiocy.

Brian Tyree Henry makes a sizeably charming appearance as Detective Mike, a down-the-hall pal who becomes increasingly bemused by the series of grisly murders going on around him. Hamill is a brilliant Chucky, from the first innocent rendition of the Buddi song to more sinister dictums. There’s no point in comparing him to Dourif; they both bring delectable voices to the table. Though, the physical doll this time round is more funny than creepy, balancing a range of facial mannerisms that can be a little too Team America.

Brendan Uegama shoots the slasher with a sophisticated eye. Environments are tactfully open, lighting is carefully employed, gorgeous frames peep through the bungling editing. For Klevberg, there’s clear direction, but at a crisp 90 minutes, there was more room for manoeuvre. Expand the Kaslan commentary, and enjoy the pulpiness of it all. This, and Brightburn, are two culprits of mainstream’s move towards the tame; liven up the kills (one with a lawnmower is particularly good already), show more gore, be deranged and disgustingly unhinged. There’s a cheeky sense of humour throughout that’s occasionally (but correctly) in bad taste – more of that would of sharpened the film’s edge.

Chucky for the smartphone generation; good fun, but laced with stupidity and missing the carefree depravity of old.