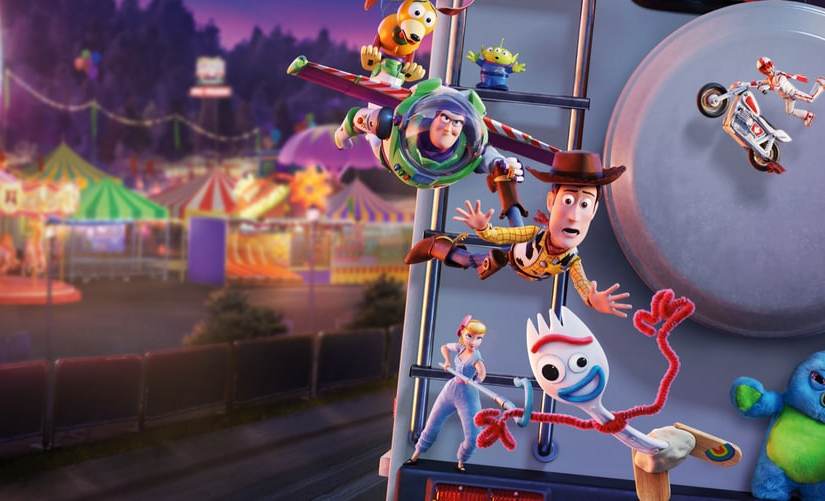 Toy Story is a cinema landmark. A turn-of-the-tide in computer animation, a blissful injection of universal jollity, and the beginning of one of film’s greatest trilogies. The road to Toy Story 4 has been one of paranoia; the third entry tied up everything in a heart-wrenching bow, so what’s the point? As the cloud-laden blue sky appears once again, with Randy Newman’s happy-go-lucky Western score, the real question is: why did we ever doubt Pixar?

Childhood attachment is a fickle thing; the initial resistance towards this fourthquel is an interesting parallel to the series’ themes. If anyone was fit for the task, it’s Josh Cooley; one of the minds behind the studio’s brilliant Inside Out. Though in helming this unexpected continuation, he’s stripped the ensemble feel; honing in on an intimate reflection of one’s wants, needs, past and fate.

We start nine years in the past, in the silhouette-begging rainfall of night. We’re still in the world of Andy, with an eclectic gathering of toys in tow. It’s a complete sugar-rush; igniting that childhood love with some a-class plaything action, bidding to rescue RC from the monsoon. Soon, we’re thrown back to the past, with Bonnie – the sweet little girl to whom Andy passed the mantle post-incinerator.

Woody (Tom Hanks), the ever-protective sheriff, is desperate to make sure Bonnie is okay on her first day of kindergarten, but soon finds himself saddled with Forky (Tony Hale) – a day-one craft construction of goggly eyes, tack and a spork. Above all else, he’s a toy; one with an identity crisis, a fear of himself and love for trash (his self-loathing is intensely relatable). Woody’s attempts at babysitting go awry near a fairground, where Forky escapes, setting of a chain of hilarious, sometimes frightening events.

In truth, there are similarities to Toy Story 3; the single location set-up is very Sunnyside, and yes there are toys who resent their past owners. But Cooley plays it out much differently. Instead of divvying up tasks, Buzz (Tim Allen), Jessie (Joan Cusack) and co. are rather sidelined; utensils in serving Woody’s plight and popping in for some gags and emotional moments.

It’s quite effective; Hanks has never been better as Woody, feeling truly human rather than merely anthropomorphic, battling his in-built addiction to keep his owner happy – a fact of ‘life’ that seems impossible to overcome. Of course, there’s another key figure in this tale: Bo Peep (Annie Potts). Making a return as a Rey-inspired wasteland warrior, with a shining polish and terrific self-assurance, she and Woody turn Toy Story 4 into an unexpected, but dizzyingly engrossing love story – think Before Sunset, but plastic and porcelain.

This, plus a refreshingly realised, un-twisty antagonist (voiced by Christina Hendricks) with a Dead Silence-esque team of terrifying dummies, and two new wicked fluffballs, Ducky and Bunny, in the form of Key and Peele, with a madcap, deranged sense of humour and boundless energy, give way to a plentiful supply of gut-bursting laughs. You won’t forget Keanu Reeves as Duke Caboom (!), a Canadian stuntman toy with a dazzling aptitude for posing (and saying “Kaboom” better than anyone on the face of the earth). The screenplay from Andrew Stanton and Stephany Folsom is arguably the funniest of the lot.

The inevitable perils do become a little repetitive (always a danger of a movie in one place) but the joy that propels stops it from grating. One thing’s for sure; it’s a stunner to look at. Meticulously rendered, finite reflections and mind-boggling detail considered from the most inconsequential of moments to soaring landscapes bursting with Coco-esque colour (there’s even a blink-and-you’ll-miss-it animated split diopter) – as an overall package, cosmetically, you cannot do any better.

Then comes the kick in the balls of your heart. Some say it’s unnecessary; I say it’s bang-on-the-money. As has been the case before, the film delves deeper into areas we never knew existed, explored themes audiences never anticipated, and manages to make adults and kids alike weep like they’ve never weeped. Kids: put down the phones, grab a toy, make a story.

A poignant, Woody-centric epilogue to an unprecedented franchise; mesmerising, hysterical and destined for ugly crying.