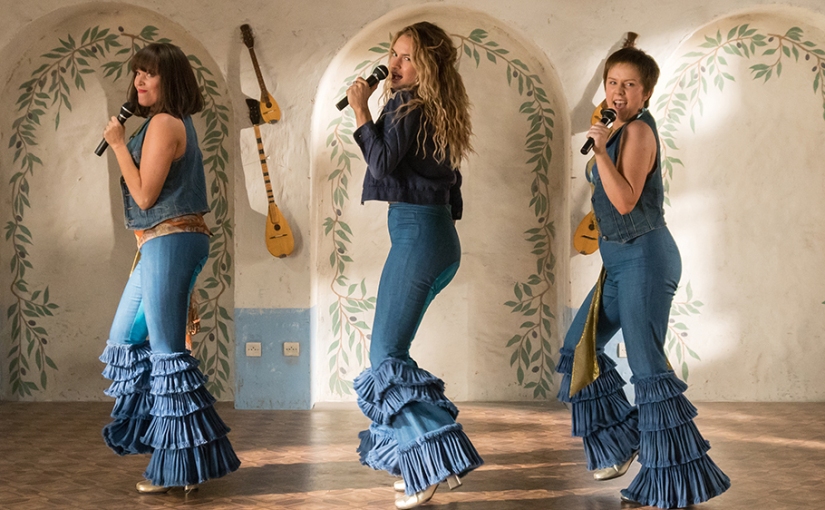 The feel-good power of ABBA isn’t lost in this inferior but joyful sequel.

The feel-good, cheer-inducing, magnificent power of 2008’s mega-musical summer hit Mamma Mia cannot be quantified. The novelty of the all-star cast, some very musically talented, such as Meryl Streep, and some not so much but incredibly endearing all the same, mainly Pierce Brosnan, was just one of the many quirks which drove the unlikely smash to become quite the phenomenon. Of course it’s based on the famous musical of the same name, but Mamma Mia has become a constant source of reference in pop culture – perhaps the ultra-happy nature of ABBA’s many, many tunes is exactly what we need right now. 10 years later, we have a Godfather Part II-esque sequel which functions both as a follow-up and a prequel, with a fully employed younger cast to show us their first summers on the island.

With the passing of Donna (Meryl Streep), her daughter Sophie (Amanda Seyfried) must take charge of the island, organising a grand opening her mother would have dreamed of. This is all while she has to deal with the long-distance strain between her and boyfriend Sky (Dominic Cooper). We also take a look back to the origin of Donna (the younger version played by Lily James) and how she made her way to the Greek paradise. Of course, this includes her first meetings with the soon-to-be-possible-fathers who were all very keen to lay all their love on her.

For the first half hour, it can be hard to shrug the feeling that the whole affair is much more contrived than its more naturally charming predecessor. While entertaining, the younger cast often are a bit more irritating than funny (although one line from Jessica Keenan, playing young Tanya is clearly popped in by co-writer Richard Curtis, “I visually enjoy you”). They’re peppy and keen to fill their iconic predecessors shoes, but it’s the simple fact that their scenes don’t induce the same size of grin. Apart from James, who is a musical revelation, a stunning enthusiastic talent that fully gives her all to the production, often embodying the spirit of ABBA’s songs effortlessly, whether it be the rebellious spark of ‘When I Kissed The Teacher’, or the heartache of ‘Knowing Me, Knowing You’.

The script is sorely weak and pales in comparison to the first entry (the writing for the young Colin Firth is abysmal). As previously noted, the film can’t ever really escape that contrived nature which plagues it throughout, but if you’re resisting its charms (much like I found myself doing in the beginning), a ‘Mamma Mia’ number wonderfully performed by James will kick-back that sceptical mind and let you enjoy the ride. From there it’s a treat in which it is utterly impossible not to smile. Emotional in the key moments, particularly towards the end, and joyous pretty much throughout. You’ll feel your heart leaping and bounding through the narrative beats, with the musical very much capitalising on the emotive, euphoric power of ABBA’s ultimate hits and some of their less mainstream tunes to crowd-pleasing effect. Then there’s the anticipated entry of Cher, a more-than-justified cameo which certainly doesn’t disappoint.

Ol Parker’s in the director’s seat this time, and although he puts some very swish camera movements in place which often give this sequel a cleaner look, the much heavier use of filmmaking trickery through green screen and weather effects does make it feel much more like a musical on stage than on location. But after all, this is a musical, and a bloody lovely one at that. One more thing – there’s nowhere near enough Pierce Brosnan singing. Not even close.

A contrived but super follow up, this is weaponised joy. You’ll want to dance, you’ll want to jive, you’ll (probably) have the time of your life.