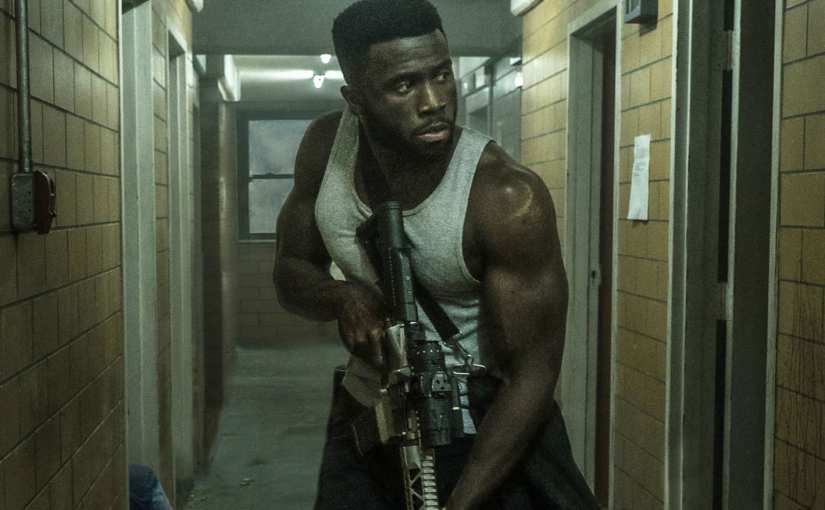 A bitter blaxploitation flick that tarnishes the Purge name.

One of the funnier things the notorious Purge franchise has given birth to is the common debate amongst friends, “Who would you kill in the Purge?” To a Purgin (crediting the Empire podcast for this sublime bit of patter), it may all seem a bit sickly and just wrong. But there’s no real harm in it – from its humble beginnings as a home invasion horror, the movies have always been layered in increasingly topical social commentary, with particular regard paid to the all-too-common racial conflict in America. Anarchy remains the series’ strongest entry, more subtle in its finger-pointing while managing to be a pulse-pounding survival outing. A prequel was inevitable, and to many, very desirable. At the heart of the infamous experiment is the fictional political party The New Founding Fathers (NFFA, cause who wants to write that every time), a murkily led organisation with motives that could only be considered immoral (unless you’re a Purger, of course). The story of how the night of crime came to be and a look at the origins of this party has a lot of promise. Alas, The First Purge is an exercise in senseless violence propelled through a heavy-handed racial narrative, with little moments that give the feature some credibility beside its far better predecessors.

Psychologist turned reluctant political ally Dr. Updale (Marissa Tomei) constructs a social experiment where the rules are simple – all crime is legal over the course of one evening, for 12 hours, including murder. The newly instated NFFA decide to trial the experiment in the low-income area of Staten Island, where families such as Nya’s (Lex Scott Davis) are forced to burrow into a local church to protect themselves. At the heart of the area is not-so-nice but soulful Dmitri (Y’lan Noel), a ‘big dog’ drug dealer with an intense loyalty to his people.

The build up to the lung-drumming klaxon plays out similarly to previous films, only this time we see far more protests against the ‘Purge’ (this is before the event is actually officially called this). These groups are predominantly made up of ethnic minorities, giving weight to the theme of white power being exercised on those living below the bread line. But the satire isn’t smart or biting. Director Gerard McMurray’s opening shot shows a white, almost Aryan doctor egging on an African-American, clear psychopath (played wickedly by Rotimi Paul, who is the sole provider of the film’s horror). Go further on in the movie, and our black hero is the town’s biggest, and definitely most ruthless dealer, killing people off at the shift of the eyes, swaggering like a Superfly wannabe. All of it is far too on the nose, to the point enemy mercenaries sport multi-coloured Klan hats out of nowhere.

There are some really interesting moments with Updale tangling with the NFFA’s nefarious chief-of-staff (an insatiable Patch Darragh), examining how turbulent and shady the origins of this wretched night actually are. But away from these, pretty much no moment of dialogue actually works, whether it is the cringe-inducing chatter between Dmitri’s henchmen, his very own incessant hero speeches (he’s really a terrible person), or the mediocre comedic relief offered up and often rejected.

While the subtext is sieved out and the script is the scariest thing about the film (disappointing from former franchise captain, James DeMonaco), the action scenes are brutally conceived, highly stylish in their craft and increasingly bloody; very bloody. The violence goes ultra in this entry to the point even a glutton for the gruesome will notice how excessive it is. The film dabbles in what it may consider heartlessness, when really there’s a big difference between watching a buff drug dealer clear out a hallway and watching a woman being thrown out of a car on CCTV, being circled and then shot in the head. That’s true, chilling heartlessness, which there was a disappointing lack of here. Remember that god-awful scene in the otherwise great Kong: Skull Island, where Tom Hiddleston goes full samurai in a green fog? The First Purge has its very own choreography catastrophe that feels so disturbingly out of place and, often, very amateurish.

The highlight of the film comes from a climatic sequence in a tower block, utilising strobe lighting in a anxiously visceral way that makes every throat slit and head blasted more powerful to the audience. But while a film of this kind demands ultraviolence, it requires substance beneath the relentless conflict to give it true meaning. There’s definitely some damning themes here that could have worked excellently, particularly in Trump’s America, but they’re so overplayed and poorly constructed, and buried beneath unforgivable stereotyping, that the fourth entry in this series feels less than worthwhile (also, I really missed Frank Grillo). Let’s make this The Last Purge, eh?

Mega Purgers may find their jollies here, but for the most part it’s a tastelessly violent, frustratingly framed shadow of its more nuanced predecessors.