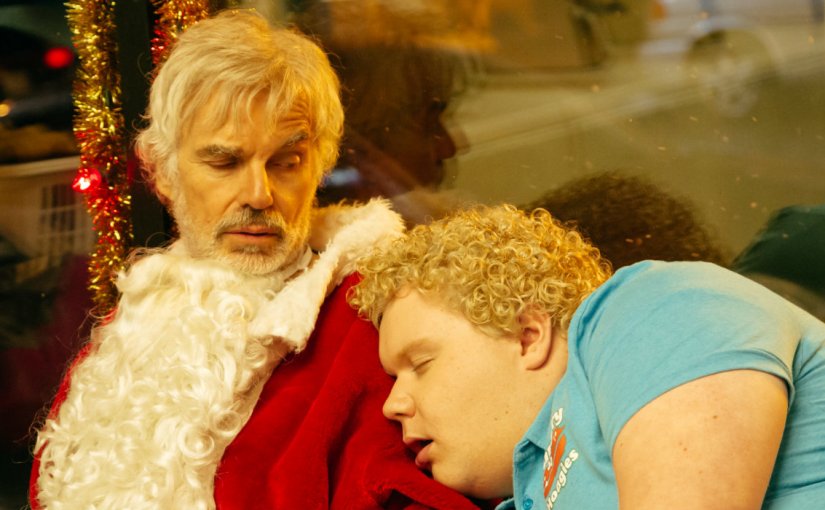 It’s that time of year again – cold nights with a Christmas movie to put a smile on your face. When you think of Christmas films, you may imagine James Stewart running down a snowy street, or Will Ferrell singing “Baby It’s Cold Outside”, or perhaps Schwarzenegger fighting for a Turbo Man. But would you put Christmas and necrophilia jokes together? Now you can, thanks to Bad Santa 2.

Willie Soke (Billy Bob Thornton) is pretty much fed up with life completely. Just as he’s about to end it all, former partner Marcus (Tony Cox) ropes him into one last festive heist, which reunites him with his crazy mother (Kathy Bates), as well as Therman (Brett Kelly) still reaching out to him.

The first Bad Santa has a huge following, thanks to a legendary turn from Thornton and fantastically un-seasonal writing from the likes of Joel and Ethan Coen. The sequel certainly doesn’t shy away from the tone of what made the first so great, but in failing to give it modern relevance, it feels outdated.

However, the return of the rudest, crudest, nastiest Santa of them all is nothing to complain about. Thornton rises above the sometimes mediocre material with an expectedly grizzled, repulsive performance. The writing isn’t all bad though, considering the high number of big belly laughs to be had from some killer one-liners. Thornton exclaiming to Bates, “did you eat your own shit?” is one of the lower level, yet perfectly hit lines. Tony Cox returns as the vulgar, foul-mouthed elf, who hits all the familiar notes well but never goes anywhere new.

Gags are often racist, sexist, and homophobic, or poke fun at necrophilia, paedophilia and suicide – they’ll make you grimace and guiltily chuckle. The writing may often rely on tired gags about midgets, or occasionally reaches for a level of immaturity that fails to grab a giggle – particularly poor Therman – but fortunately bigger laughs make you forget about the various shortcomings. The rest of the cast are decisively dire, presenting next to no likability or feeling so comically unnatural that all you can do is forcibly laugh until Thornton comes back.

The first seasonal effort of the year is anything but festive, but serves as a warm reminder that offensive, stupid humour and Christmas can go together. Forget “Ho, Ho, Ho”, this year I’ll shout “God damnit!”.

Let us know what you thought of Bad Santa 2 in the comments, tweet us or check out the Facebook page!