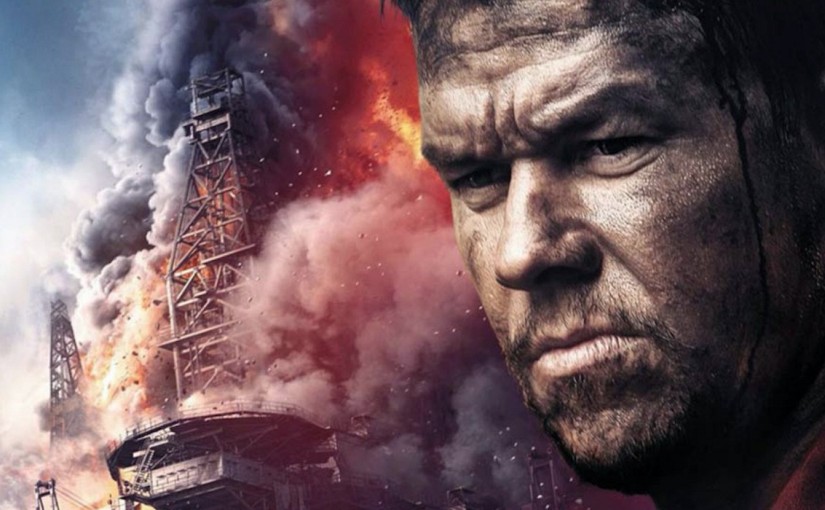 The Deepwater Horizon oil spill was the worst oil disaster in U.S history. As well as the death of 11 crew members, an estimated 210 million gallons of oil gushed into the Gulf of Mexico, ultimately leading to mass harm to wildlife and oil company BP paying out billions in fines. Deepwater Horizon gives us a harrowing, jaw-dropping insight into the events on the night the rig fell.

The film tells the true story of the ill-fated Deepwater Horizon oil rig, that exploded in April 2010 as a result of faulty equipment and poor safety measures.

Director Peter Berg, who was a replacement for J.C Chandor following his departure due to creative differences, hasn’t tried to turn the story into tasteless entertainment. We spend the first hour getting know a bit about the lead character Mike Williams (played by Mark Wahlberg – also an executive producer), but mostly exploring the oil rig through a series of densely jargon-filled exchanges which although boggling, give Deepwater Horizon a very authentic feel.

When watching you’ll be wondering how they managed to hire a rig – they didn’t. It’s all a set, a damn good one at that. Perhaps one of the finest ever made, the meticulous detail is hugely rewarding and immersive.

As well as making the film more authentic, the first hour is essentially a dread-builder. We know what’s coming, we just don’t know when. Numerous tests are done, with the intensity escalating each time. “Is it gonna burst? Is this it?”. However, you can’t be prepared for the sheer impact of the devastation when the pivotal and inevitable disaster begins. It starts off contained, with a brief glimpse of hope. But it soon tears down everything around it, sending explosions through the whole rig in an eye-popping, face-squinting series of scenes.

The initial carnage is bad enough, but then comes the fire. The panning and point-of-view shots will send a chill up your spine. Yes the special effects are spectacular, but then that little reminder goes off in your head – this actually happened. The true-life attachment certainly gives Deepwater Horizon a boost, even if the carnage soon becomes a bit stale as Berg runs out of new developments.

It’s in these moments you’d hope to rely on the characters – unfortunately they can’t quite match the behemoth of flames going on around them. But that’s no easy task so it’s hard to criticise too deeply – the destruction becomes the star in the later third. You’ll still route for Wahlberg as usual, but Kurt Russell is a stand out as Mr Jimmy, the man in charge of the oil rig. He’s instantly likeable but clearly knowledgeable, which gives you a much deeper satisfaction against the mindless BP executives (lead by John Malcovich). Seeing them amongst the inferno they had a part in will make you want to exclaim “He told you so!” – but again, the true-life link makes it all the more unsettling.

Other small cast members are treated with respect, playing real life people from the rig at the time. No one feels exaggerated, or moulded for entertainment; they’re all moving parts in a respectful vision of a horrific disaster.

Berg has delivered a truly admirable take on the worst oil disaster in U.S history. As well as a terrifying vision of the destruction, it efficiently pays tribute to the ordinary men who became real heroes.

What do you think of Deepwater Horizon? Let me know in the comments, tweet us, or check out the Facebook page!