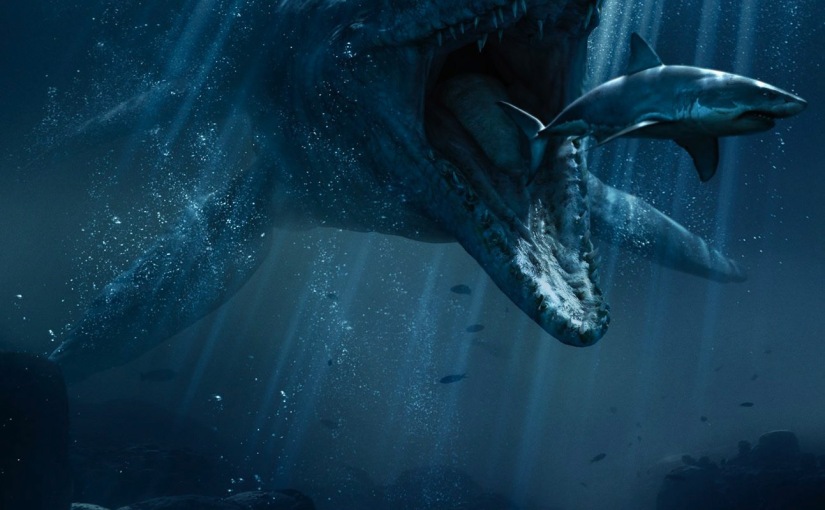 Normally I open my reviews with some kind of description that feels like a suitable introduction to the film. In my head this would help those who don’t really know much about it. But this is different – this is Jurassic World.

Set 22 years after the events in the first film (Jurassic Park), the full functioning theme park Jurassic World is finally open for business. Despite the money the park brings in, they are always looking to find new ways to increase attendance. So, they genetically engineer a new breed of dinosaur, but things don’t go according to plan.

Now, I’m pretty sure everyone I know has heard of the Jurassic Park series in some way. Whether it is from when you were younger or only now that the new one is all over social media, it is very well known. For me, the whole series is close to my heart, as I watched the first three films as a wee boy. Part of me was a little scared that Jurassic World would be a dire addition to the series, but my oh my was I wrong.

First of all, the cast were fantastic. The young boys had a great brotherly chemistry which really added to the impact of their scenes. I have no doubt they have great careers in front of them. Bryce Dallas Howard and Chris Pratt star as the main leads. Howard is great, but as a fan of Chris Pratt, his rise to super-stardom is perfectly represented in such a big blockbuster like this. Built, smart and witty, he is superb here.

Secondly, the soundtrack is wonderful. The inclusion of the original theme gave me goosebumps, and throughout the film the score makes viewing the action so much more exciting.

Last but not least the dinosaurs; incredible! The rampaging Indominus Rex is terrifying and a wonder to watch onscreen. Not to mention the other monsters we get the pleasure of viewing, especially the raptors and the Mosasaurus (imagine a huuuuge alligator). There are some points where CGI could have been a little better, but hey, who’s caring – we’re there to see dinosaurs and Jurassic World delivers.

My only real problem with the film is that at times it can be a little cheesy, even for a summer blockbuster. That being said, it is still terrifically enjoyable and fun. There’s enough dino-carnage to keep everyone happy, and hats off to director Colin Trevorrow for successfully bringing dinosaurs back to our screens in spectacular style. Can I get a pet Raptor now?

Check out the trailer below:

Am I insane? Is this another garbage blockbuster? Or did you love Jurassic World? Let me know in the comments below or send a tweet using the widgets to @frew_cameron.

One thought on “The park is open – Jurassic World review”