A gargantuan beast of a superhero masterpiece.

[This review is spoiler-free. But it is advised to those who are planning on seeing the film that they watch it first and come back. This writer respects the sanctity of fandom and the necessity to avoid ruining it for other people]

10 years ago, a seemingly humble superhero film hit cinemas, showcasing a B-level character, Iron Man, but sporting a notorious lead, Robert Downey Jr, in a hopeful comeback. Little did we know, this audacious, landmark moment in cinema kicked off the Marvel Cinematic Universe (MCU), a sprawling, decade long saga of Earth’s Mightiest Heroes. This included Iron Man, Captain America, Thor, the Guardians of the Galaxy, and of late, Spider-Man and Black Panther. It’s become a common occurrence for characters to pop up in each solo film, for example Tony Stark is central to Homecoming‘s plot.

But when looking back at this magnificent universe, everyone remembers The Avengers (for the purposes of this review, we’ll ignore the UK’s stupid name). A blockbuster many thought would never come to fruition, purely because of its avant-garde scale, director Joss Whedon proved the world wrong, cementing himself and the film in movie history forever. His follow up, Age of Ultron, was for all intensive purposes, a let-down following the predecessors soaring heights. While Captain America: Civil War was dubbed ‘Avengers 2.5’, as it saw many characters come together and face off (that airport fight though), we haven’t had the full team together in a while. But, looking back to The Avengers; a little post-credit scene featuring a purple, smiling man teased something much grander. We were all naive. We couldn’t foresee what was coming. After six years of teasing and leaving loose-ends around each film, the universe is ready to be balanced, as well as put a smile on our face. Thanos (Josh Brolin), an Infinity Stone hunting titan, is here, and it’s a reasonable guarantee that the fans are not ready.

The film is based around a collection of mighty Macguffins – the Infinity Stones. Thanos, a gigantic purple unit, wants them all, allowing him to ‘balance the universe’ – or in less optimistic terms, wipe out half of all life. This forces The Avengers and the Guardians of the Galaxy to come together to stop the titan, and save the world.

The hype around this film was, nearly, insurmountable. Sold as the ultimate showdown and the most ambitious crossover in history (a claim which has been milked and mocked online), it would be difficult for any film to overcome the oncoming onslaught of devoted, opinionated fans after 10 years of build-up. But Joe and Anthony Russo have once again proved their might as superhero masters, effortlessly weaving between a ginormous cast and their varying narratives, serving up an utterly magical and powerful slice of fan service.

Speaking as a fan, it’s everything the original Avengers movie did well, and more. Age of Ultron was far from perfect (in fact, it’s actually not that great at all). That’s not to say Infinity War is, with the odd off joke and perhaps a few minutes too long in some places, but it takes all the best bits of the MCU so far and throws them at you in a glorious free-form fashion that never feels strenuous or ‘in your face’ – unlike the Guardians’ second outing which turned everything up to 11, not necessarily to successful effect. Folks who aren’t pretty up-to-date with the events of this universe will likely struggle with the cinematic juggling act, nor will they connect as much with the indisputably, earth-shattering stakes – but they will still succumb to the extravaganza’s irresistible, epic charm if nothing else.

Villainy is a fickle thing; look at The Walking Dead. For the best part of a year-and-a-half, they built up the entrance of their own big-bad, Negan. His initial arrival was marvellous, but from here he’s largely lost his impact. With Thanos, the stakes were so much higher. From references to his deplorable acts, to his rare cameos on-screen, audiences have built up an insatiable palate for a truly terrifying Titan over the past decade. And what a miracle it is that Thanos (alongside his despicable sidekicks, who are mostly serviceable) is not only good, but perhaps the greatest MCU villain. His motives aren’t out of greed, or lunacy, rather, they’re (reasonably) rational. When you’re managing to get audiences to understand and maybe even sympathise with a purple colossus that can put a sweet beating on everyone in the universe (Hulk included), as filmmakers you should know you’ve done something right. This is partly down to screenwriters Stephen McFeely and Christopher Markus’ terrific screenplay, which introduces Thanos with a hefty, intimidating monologue, and continues to afford him some killer lines and gripping character development. Great words need a great actor, a requirement Josh Brolin was happy to deliver. Performing the beast with an impassioned soul, temperament and controlled menace, he is never anything less than captivating. 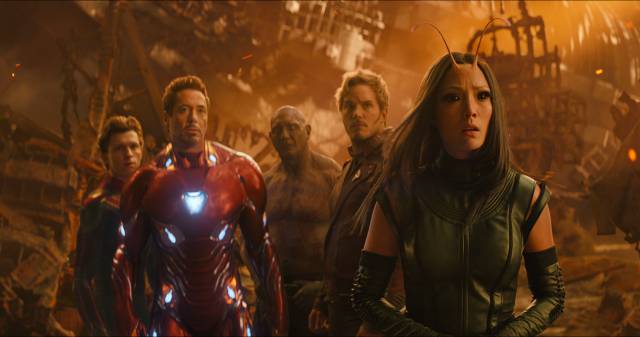 The script doesn’t just serve the Great Titan however. The two-and-a-half hour running time is a cacophony of unlikely team ups across the galaxy, and alongside the Russo Brothers, they inject heart and wit into every encounter. Whether it’s Thor (Chris Hemsworth) hilariously referring to Rocket (Bradley Cooper) as “Rabbit”, or Tony Stark aka Iron Man and Doctor Strange (Benedict Cumberbatch) clashing egos while Spider-Man (Tom Holland) hangs around innocently, no scene feels unnecessary or unpacked. The latter grouping is the most delectable of the adventure, providing the most laughs, but also some fantastic tone-setting moments – for example, when Stark questions what Strange actually does, his icy “Protecting your reality, douchebag” response is perfect). There are a lot of plot-threads to account for, so naturally, some people don’t get as much screen-time. This mostly applies to those present in Wakanda, including Captain America (Chris Evans pulling off a fantastic beard), Black Panther (Chadwick Boseman) and the rest of the team. If they were to all have equal time, this would be a four-hour event, which isn’t something the nation’s bums could all handle.

But for every location, there are breathtaking scenes in every, single one. Let’s face it, it’s why we all want to see Infinity War – seeing all of our favourite heroes together, fighting to protect the world. The Russo’s deliver a staggering barrage of jaw-dropping action sequences, all as grand as they could be, both visually stunning and intricately crafted. Intricate is the perfect word to describe the evident care that has gone into the production, which has resulted in the greatest cinematic pay-off, perhaps, of all time.

A welcomed return is that of Alan Silvestri, who composed The Avengers’ tremendous, underrated theme (which criminally wasn’t used in the first sequel). His ‘greatest hits’ score hits all the necessary,nostalgic notes, while bringing a new overwhelmingly emotional piece to the table, lifting the hairs on your arms while you cry.

Not only does the film service the fans, but it’s (and there’s no other word for it) very, very ballsy. Crushingly somber is a fair assessment, and while this is a ‘Part 1’, that isn’t a criticism. The filmmakers had the courage to deliver many a gut-punching shock and blow, likely to leave filmgoers in a stunned state akin to PTSD. But there’s a huge rewatch quality here that will encourage viewers to book their next viewing while walking out the cinema. That’s the thing with all the best rollercoasters –  you just want to get on it again, and again, and again. The wait for 2019 already hurts.