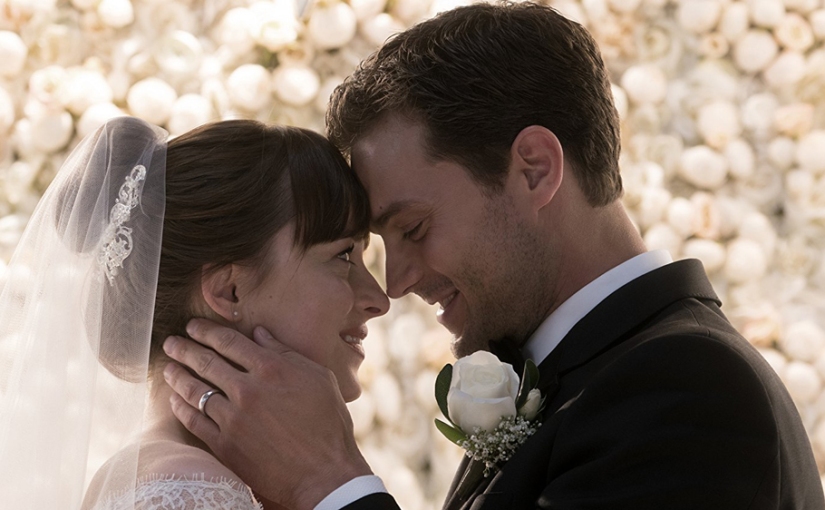 Finally we are freed from the one of the worst mainstream film trilogies of all time. The popularity and perverse fascination with the franchise (particularly the excruciatingly badly written source material) remains an elusive mystery to many, but here’s the thing – the books were written out of passion, and nobody can take that away from the author. The films however are cash-hungry productions, tapping in on the worldwide audience. While the first film had a novelty and is almost enjoyable, the third film is an advance of the severe, mind-numbing issues of the second, focused on trivial melodrama that’ll evoke rolling of the eyes (only you won’t get spanked).

Anastasia (Dakota Johnson) and Christian (Jamie Dornan) are now married. Enjoying their timid honeymoon, the couple’s happiness is soon interrupted by the return of Jack Hyde (Eric Johnson), who’s out for blood after Ana lost him his job. That plus the delicate issue of children, their relationship remains pretty rocky.

What’s the film about? Good question. There’s no clear narrative direction whatsoever – you have Ana and Christian’s marriage, their couply drama (which of course leads to ‘kinky sex’ your Gran wouldn’t even raise an eyebrow at), the return of Jack Hyde, an aggressive Christian Grey wannabe played terribly by Johnson, and a couple of other twists and turns. A packed story should be a film’s biggest strength if woven properly, enabling the viewer to embark on a feat of dramatic storytelling that’ll keep them gripped. However in Freed, something happens, then another thing happens, oh now we’re in this place, and now we’re in this place. It’s a series of unconnected plot-threads that never try to earn its audience’s love, or at the bare minimum, attention.

It encapsulates all of the aspects which have made this trilogy, as a whole, an entirely useless waste of filmmaking. No one is going to look back on the series as a classic, nor is anyone going to appreciate them as a guilty pleasure. These last two films in particular tread along an impressive line in which they’re not so bad they’re enjoyable, nor are they good – they’re just a plain ol’ mess, devoid of enjoyment beyond a smug chuckle of derision.

James Foley’s direction is adequately pretty at times, with a polished shine that elevates the film visually, but that’s because the whole romp is a glorified Audi commercial intertwined with some vanilla sex, slowed down pop songs and pointless storytelling in-between. Seriously count the Audi’s and tell me I’m wrong.

As has been the case from the start, Jamie Dornan’s inanimate, lifeless presence drains any soul from both the onscreen relationship and the movie. Dead behind the eyes and filled with remorse for cursing himself with the legacy of this wretched role, he may be finally free from its grip but the shadow it has casted over his career could be detrimental. Also why does he have a near comical musical number?

Returning to the endearing comedy origins of her first performance, Johnson has always breathed an admirable degree of life into Ana, impressive as she is a poorly written character in the first place. But in both the second and third entry, she is constantly wrapped up in incomprehensibly silly drama that limits her potential. Maybe now that she can say goodbye to this pitiful franchise, we’ll see her take on some meatier material.

If by the end, god forbid, you’re feeling nostalgic and warm remembering the earlier films, there’s a lovely little highlight reel – which funnily enough, features clips predominantly from the first, and strongest, movie – to remind you exactly how far we haven’t come. This is a film which will reel in moviegoers, some that’ll be avid fans, mostly, people looking for a laugh in the cinema. But as a dramatic piece of sexually tantalising fiction, it’s the cinematic equivalent of erectile dysfunction.

Promotions for the film have been encouraging audiences, “Don’t miss the climax”. This is one of the few occasions where it should have came early.