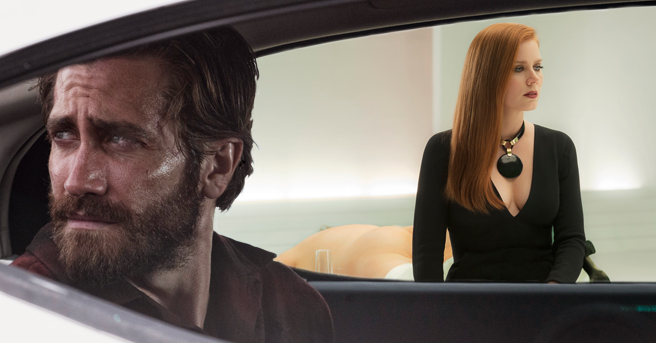 A montage of obese, sparkling flesh rippling like a harsh ocean isn’t a conventional way to start a film. Nocturnal Animals is best taken as one big connotation (the fat ‘art’ is a representation of how ugly our lead character’s life is). However, as boggling as sequences may be, they’re exquisitely shot, no less by fashion designer turned director Tom Ford, who’s last outing with A Single Man was a hard act to follow.

Susan (Amy Adams) is a successful artist, who isn’t happy with herself or the life she is leading. Her ex-husband (Jake Gyllenhaal) sends her a manuscript for his new novel, which sends Susan into a spiral of reflection and regret, and perhaps change.

Despite a dazzling immediate start, the period that follows is wobbly, failing to grab any long lasting interest in what was to come. Susan as a character isn’t likeable; moping around with a lavish lifestyle. Tom Ford stylises each scene with a materialistic lean, showing us just how good Susan has it – only making us spite her more. Thankfully, things pick up when she receives a manuscript from her ex.

This is when the film splits into two; one half melodramatic love drama, the other gritty, murder-mystery western. We switch between reality and dramatisations of the novel Susan reads throughout the film. Gyllenhaal plays both Susan’s ex and the main character in the aptly titled “Nocturnal Animals”. Both characters aren’t vastly different, but the actor shows off some remarkable acting chops playing two roles seamlessly.

The plot plays out with a delicate touch, like a continuous dot-to-dot revelation. Each development in the book’s plot links closely to Susan’s actions in the past, amping up the intrigue until a cruel reveal.

There’s many guest performances also, with the likes of Michael Sheen and Michael Shannon being the top two appearances. The star power adds power to the story, which unfortunately loses steam as time marches on. The western side could be a film in its own right, but when we’re focusing on Susan, the melodrama becomes less emotionally engaging. Saying that, it’s a tremendous effort from Ford, and certainly not a failure by any means.

Ford’s successful switch from romantic-drama to noir is a titillating prospect for the future. It may run out of puff occasionally, but Nocturnal Animals is a stunning, atmospheric tale that deserves one watch, but probably no more.

What do you think of Nocturnal Animals? Let us know in the comments, tweet us or check out the Facebook page!